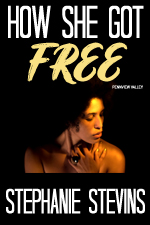 HOW SHE GOT FREE

Can they leave their toxic past behind?

Bonnie Carson is living a women’s fiction saga —juggling a career, a teenager, and an eating disorder. Meanwhile, her ex-husband can’t let go, making co-parenting an awkward and intense experience. Her strained relationship with the mother who abandoned her is the bitter frosting on her lopsided cake.

Her ex, millionaire mobster Leo Monarch, carries himself like the hero of a romance novel. In his mind, he’s one half of a sympathetic—yet complex—couple with a divorce in their rearview mirror and a reconciliation on the horizon. He’s determined to win his ex back—whether she likes it or not.

When their daughter’s life is endangered, Leo and Bonnie tumble into a world of suspense. The duo must put aside their differences to keep her safe, especially after they discover she wasn’t hurt because of Leo’s underworld activities. It was a personal attack, launched by someone much closer to home.

Confronting an unforeseen enemy forces Bonnie to make peace with her past—so that it doesn’t destroy her future.

AVAILABLE NOW
(*As an Amazon Associate I earn from qualifying purchases.)